Java Operator SDK is a high level framework and related tooling in order to facilitate implementation of Kubernetes operators. The features are by default following the best practices in an opinionated way. However, feature flags and other configuration options are provided to fine tune or turn off these features.

Reconciliation Execution in a Nutshell #

After a reconciliation ( i.e. Reconciler called, a post-processing phase follows, where typically framework checks if:

Briefly, in the hearth of the execution is an eventing system, where events are the triggers of the reconciliation execution.

The finalizer that is automatically added will be also removed after the cleanup is executed on the reconciler. However, the removal behaviour can be further customized, and can be instructed to “not remove yet” - this is useful just in some specific corner cases, when there would be a long waiting period for some dependent resource cleanup.

The name of the finalizers can be specified, in case it is not, a name will be generated.

When not to Use Finalizers? #

When automatic finalizer handling is turned off, the Reconciler.cleanup(...) method is not called at all. Not even in case when a delete event received. So it does not make sense to implement this method and turn off finalizer at the same time.

The reconcile and cleanup #

These two classes are used to control the outcome or the desired behaviour after the reconciliation.

The UpdateControl can instruct the framework to update the status sub-resource of the resource and/or re-schedule a reconciliation with a desired time delay.

Note, that it’s not always desirable to always schedule a retry, rather to use EventSources to trigger the reconciliation.

Those are the typical use cases of resource updates, however in some cases there it can happen that the controller wants to update the custom resource itself (like adding annotations) or not to do any updates, which is also supported.

Always update the custom resource with UpdateControl, not with the actual kubernetes client if possible.

On resource updates there is always an optimistic version control in place, to make sure that another update is not overwritten (by setting resourceVersion ) .

The DeleteControl typically instructs the framework to remove the finalizer after the dependent resource are cleaned up in cleanup implementation.

However, there is a possibility to not remove the finalizer, this allows to clean up the resources in a more async way, mostly for the cases when there is a long waiting period after a delete operation is initiated. Note that in this case you might want to either schedule a timed event to make sure cleanup is executed again or use event sources to get notified about the state changes of a deleted resource.

Having .observedGeneration value on the status of the resource is a best practice to indicate the last generation of the resource reconciled successfully by the controller. This helps the users / administrators to check if the custom resource was reconciled.

In order to have this feature working:

On an operator startup, the best practice is to reconcile all the resources. Since while operator was down, changes might have made both to custom resource and dependent resources.

To turn off this feature set generationAwareEventProcessing to false for the Reconciler.

In case informers are all in place and reconciler is implemented correctly, there is no need for additional triggers. However, it’s a common practice to have a failsafe periodic trigger in place, just to make sure the resources are reconciled after certain time. This functionality is in place by default, there is quite high interval (currently 10 hours) while the reconciliation is triggered. See how to override this using the standard annotation:

This feature can be turned off by setting reconciliationMaxInterval to Constants.NO_RECONCILIATION_MAX_INTERVAL or any non-positive number.

When an exception is thrown from a controller, the framework will schedule an automatic retry of the reconciliation. The retry is behavior is configurable, an implementation is provided that should cover most of the use-cases, see GenericRetry . But it is possible to provide a custom implementation.

It is possible to set a limit on the number of retries. In the Context object information is provided about the retry, particularly interesting is the isLastAttempt, since a different behavior could be implemented based on this flag. Like setting an error message in the status in case of a last attempt;

Event if the retry reached a limit, in case of a new event is received the reconciliation would happen again, it’s just won’t be a result of a retry, but the new event. However, in case of an error happens also in this case, it won’t schedule a retry is at this point the retry limit is already reached.

A successful execution resets the retry.

In order to facilitate error reporting Reconciler can implement the following interface:

The updateErrorStatus method is called in case an exception is thrown from the reconciler. It is also called when there is no retry configured, just after the reconciler execution. In the first call the RetryInfo.getAttemptCount() is always zero, since it is not a result of a retry (regardless if retry is configured or not).

The result of the method call is used to make a status update on the custom resource. This is always a sub-resource update request, so no update on custom resource itself (like spec of metadata) happens. Note that this update request will also produce an event, and will result in a reconciliation if the controller is not generation aware.

The scope of this feature is only the reconcile method of the reconciler, since there should not be updates on custom resource after it is marked for deletion.

Retry can be skipped for the cases of unrecoverable errors:

There is a possibility to turn off the automatic retries. This is not desirable, unless there is a very specific reason. Errors naturally happen, typically network errors can cause some temporal issues, another case is when a custom resource is updated during the reconciliation (using kubectl for example), in this case if an update of the custom resource from the controller (using UpdateControl) would fail on a conflict. The automatic retries covers these cases and will result in a reconciliation, even if normally an event would not be processed as a result of a custom resource update from previous example (like if there is no generation update as a result of the change and generation filtering is turned on)

Retry, reschedule and standard event processing forms a relatively complex system, where these functionalities are not independent of each other. In the following we describe the behavior in this section, so it is easier to understand the intersections:

Event sources are a relatively simple yet powerful and extensible concept to trigger controller executions. Usually based on changes of dependent resources. To solve the mentioned problems above, de-facto we watch resources we manage for changes, and reconcile the state if a resource is changed. Note that resources we are watching can be Kubernetes and also non-Kubernetes objects. Typically, in case of non-Kubernetes objects or services we can extend our operator to handle webhooks or websockets or to react to any event coming from a service we interact with. What happens is when we create a dependent resource we also register an Event Source that will propagate events regarding the changes of that resource. This way we avoid the need of polling, and can implement controllers very efficiently. 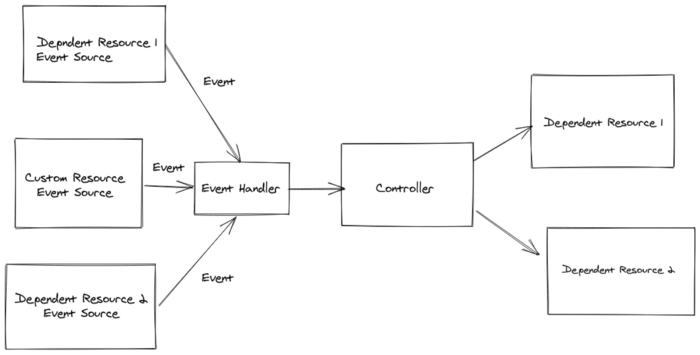 Typically, when we work with Kubernetes (but possibly with others), we manage the objects in a declarative way. This is true also for Event Sources. For example if we watch for changes of a Kubernetes Deployment object in the InformerEventSource, we always receive the whole object from the Kubernetes API. Later when we try to reconcile in the controller (not using events) we would like to check the state of this deployment (but also other dependent resources), we could read the object again from Kubernetes API. However since we watch for the changes, we know that we always receive the most up-to-date version in the Event Source. So naturally, what we can do is cache the latest received objects (in the Event Source) and read it from there if needed. This is the preferred way, since it reduces the number of requests to Kubernetes API server, and leads to faster reconciliation cycles.

Note that when an operator starts and the first reconciliation is executed the caches are already populated for example
for InformerEventSource. Currently, this is not true however for PerResourceEventSource, where the cache might or might not be populated. To handle this situation elegantly methods are provided which checks the object in cache, if not found tries to get it from the supplier. See related method .

To register event sources Reconciler has to implement EventSourceInitializer interface and init a list of event sources to register. The easiest way to see it is on tomcat example (irrelevant details omitted):

In the example above an InformerEventSource is registered (more on this specific eventsource later). Multiple things are going on here:

Note that a set of ResourceID is returned, this is usually just a set with one element. The possibility to specify multiple values are there to cover some rare corner cases. If an irrelevant resource is observed, an empty set can be returned to not reconcile any custom resource.

There are multiple event-sources provided out of the box, the following are some more central ones:

More on the philosophy of the non Kubernetes API related event source see in issue #729.

Contextual Info for Logging with MDC #

Logging is enhanced with additional contextual information using MDC. This following attributes are available in most parts of reconciliation logic and during the execution of the controller:

For more information about MDC see this link.

A typical scenario would probably involve extracting the list of target namespaces from a ConfigMap or some other input but this part is out of the scope of the framework since this is use-case specific. For example, reacting to changes to a ConfigMap would probably involve registering an associated Informer and then calling the changeNamespaces method on RegisteredController.

If watched namespaces change for a controller, it might be desirable to propagate these changes to InformerEventSources associated with the controller. In order to express this, InformerEventSource implementations interested in following such changes need to be configured appropriately so that the followControllerNamespaceChanges method returns true:

As seen in the above code snippet, the informer will have the initial namespaces inherited from controller, but also will adjust the target namespaces if it changes for the controller.

See also the integration test for this feature.

Note that this is feature of Fabric8 Kubernetes Client not the JOSDK. But it’s worth to mention here.

To automatically generate CRD manifests from your annotated Custom Resource classes, you only need to add the following dependencies to your project:

Quarkus users using the quarkus-operator-sdk extension do not need to add any extra dependency to get their CRD generated as this is handled by the extension itself.